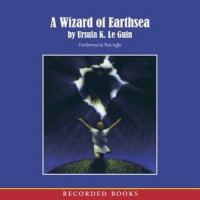 My dad read the first four to us when we were tiny smol, and then I reread the trilogy as a teen, so it's very hard to separate this book from my memories of this book, which are vague but wondrous.

Le Guin herself said that the lack of positive, powerful women was a mistake made by a young author who wasn't yet secure in her writing, and thought that joining the fantasy authors boys' club meant writing about boys. Which shows, and I'm not going to tell anyone that the first book is not sexist and exclusive. I'm putting that mostly first in order to then set it aside for the rest of the review. (I will say that my father's open adoration of books written by a woman did something for my own confidence as a writer.)

What the book is about is a young man who isn't yet secure in his power, and thinks that joining the wizard's boys' club means being a dick. The rest of the book shows him learning from other wiser, kinder and more gentle men, and learning from himself, and learning to love. The quest is not to slay anything (though some dragons bite the dust along the way), but to understand and be better. Better explicitly means more compassionate.

It also deals with trauma recovery, in a way that I immediately identified with. Early in, our hero over reaches, and is hurt very badly, and with potentially world-ending consequences, and the memory of that hurt echoes through everything he does for the rest of his life. It's more obvious at first, where he basically curls in a ball and doesn't talk to anyone, and refuses to use magic, but even towards the end, he holds this hesitation in his heart. It could hurt again; he could screw up again; would it be better if he just... stopped. (It also deals with depression.) The depth of feeling is incredible.

Everyone talks about Le Guin's use of language, and I remembered it being very beautiful, but I hadn't remembered how completely in control of it she was, at a sentence level, even this young. The prose is very high fantasy, but unlike a lot of Tolkien imitators, Le Guin knew how to use the "Why Yes, I have read Beowulf more than once" sort of old English turns of phrase and restrained emotion to wonderful effect. It plays along and under and through our hero's own hesitation, and snarkily comments on his previous arrogance. When we see him break, it's all the more powerful because of his previous restraint. (At one point, he says something mildly disappointed, and I immediately wanted to hug him, because he was clearly heartbroken.)

Finally, I love Vetch, and want to read a whole series about him being the Wizard of Iffish, and what his family is doing, and possibly hanging out with Sparrowhawk when he blows through.